Benedetta: “After three months of missions, my emotions and feelings were indescribable, I learned a lot of things, especially on a human level”


The idea of doing a humanitarian experience had been on my mind for a while. Now it’s done! I am writing this report a week after my departure, at this moment the memories seem clearer than ever. I was living in Thiès, the second largest city in Senegal, a crossroads of all the roads that cross the country. I had never organized a trip entirely alone so far away, and it was my first time in Africa!

As far as I’m concerned, the biggest challenge was the whole preparation part. The second challenge was also to succeed in adapting to the “colocation” once I arrived in Thiès (a major weak point of the experience). The culture and the local environment were radically different, on the other hand, I left to discover another culture and my curiosity pushed me throughout the duration of my stay, during the hardest days too. So I arrived in Thies with a double expectation for this experience, on the one hand, I wanted to have my own experience of a mission of solidarity, and on the other hand, I saw this trip as an opportunity to discover perhaps another professional path in international cooperation organizations.

My actions within the organization of the association

I worked at two of La Palabre’s activity centers. At the time of my arrival, it was the PONTI ticket office and the evening school. The PONTI window was created with funding from the Italian Ministry of Foreign Affairs to support the local development of companies and self entrepreneurs. At the end of the project (it ends in March 2019) I was able to contribute to the closure of the files and the reorganization of the administration.

My actions within the school of the Palabre evening school, Cité Lamy – Thies

During my stay in Le Palabre, most of the time was dedicated to the organization of the evening school. When I arrived, unfortunately, there were only two animators really present, a young student Modou Bousso, and Prof. Ibrahima Mboup. Both were working hard to keep the school running smoothly, but with the lack of facilitators, it was not easy to manage the administrative and practical aspects. The first thing we did together, a few days after my arrival, was the school schedule, which was more or less respected throughout my stay (with the integration of Youri and another facilitator). Contrary to what we thought, the big difficulty was not in finding facilitators, so the number of active members, but rather the constancy of the facilitators in relation to the activities of the evening school. Finally, we managed to create a well-consolidated team composed of Ibrahima, Modou, Mariama and Coumba Diallo and the volunteers sent by AIME available (at that time Youri and I). To facilitate and supervise the administration of the evening school, I created student files which were mainly used to keep under control the contributions of families for the enrolment of their children.

Regarding initiatives directly related to student learning, we started to introduce other complementary subjects and lessons as children’s learning in public schools was quite limited, especially regarding French and conversation. So we reduced the revision to twice a month (before it was every day) and replaced it with lessons in French, geography, history and English, which were very successful among the children, who gradually began to “expose themselves” a little more and dialogue in French with us also on current topics, such as the environmental lessons organized with Youri.

As a result of these awareness lessons, we were able to distribute the school materials so that the students could start treating their notebooks with respect and at the same time the environment. This distribution was possible thanks to the fundraising that Youri did before his arrival.

After three months of missions, my emotions and feelings are indescribable, I learned a lot of things, especially on a human level. 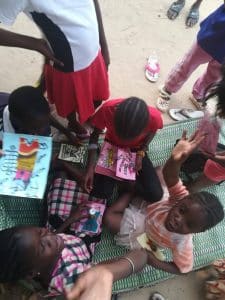 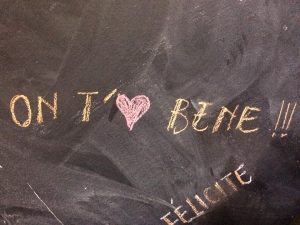