Ilona, a young woman of 21 years old, decided to go on a 3-month humanitarian mission to the Ban Pak Audomsung Learning Centre to give English lessons to Karen children living in Thailand. In this testimony, Ilona tells us how her first week at their side went. 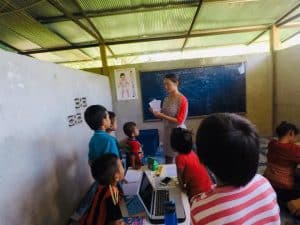 I arrived Thursday afternoon after Gloria and Christopher picked me up in Ban Tha Song Yang after a long trip (bangkok, mae sot, then 3h30 by bus to arrive in the village with beautiful landscapes and a German who made me talk)

I was very moved to meet them, we went directly to pick up the children from school so that I could see them for the first time. The contact was simple but we all needed to get used to each other…I gave them the few things I had for them, and some cakes, we thought it was Christmas….

The first night was complicated, I won’t hide it from you, between thunderstorm and lack of comfort, although they made my bed entirely, brought food into the room. I fell into “culture shock”.

So I woke up late the next day, with a salty breakfast that I am not used to, always in a good mood.

Then we did the laundry, by hand with gloria, who explained her method to me.

Then I took my first “shower”, quite atypical it is true that I am not used to washing myself with a bucket of water, without hot water but you get used to it quickly. 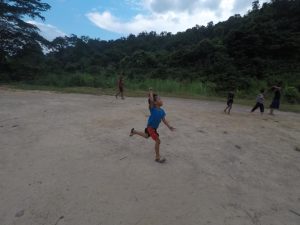 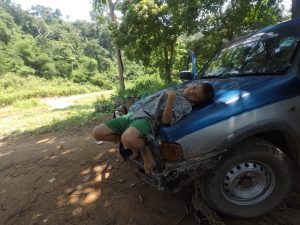 After an initial two-hour nap, I played my first game with the children. You have to use your imagination because yes, they don’t have much. No ball, no games, so I decided to opt for the station street, a sparrowhawk and a totally invented game. To finish with “hakunamatata” before taking part in the evening prayer, accompanied by songs, magnificent.

So I am beginning to acclimatize myself little by little to this new way of life, where I have the impression that the children will bring me so much more than I could bring myself. Values of solidarity, simplicity, independence and a lot of love…they show interest in everything and are amazed by what we find commonplace. 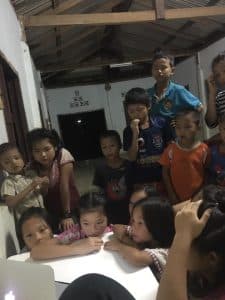 After a week in the Ban Pak Audomsung Center:

“A first week “rich” in emotions. I don’t even know where to start, I think that above all it is a personal, unique experience, although it is even better when you share it.

I am integrating little by little, showing the positive, despite some hard knocks, which are not necessarily due solely to a lack of country or family/friends, although this is obviously present.

But above all to a will to do more, to feel guilty about having to travel more, to be able to turn on a tap without worrying if I will have enough water to drink, shower, never run out of food, to dress, to have hygiene products like toothpaste, soap that we have in stock x15 following our purchases at DM…

I knew I was lucky to have this life, but I didn’t think on such a big scale, for the little anecdote drinking half a coke, eating pasta, and being able to sing with them the projected prayer in English lit up my day, while Gloria spent 15 hours in her plots. 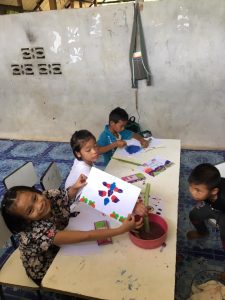 The kids are happy. I was able to observe that they were free, that is the first thing that challenged me, this great freedom. They sleep when they are tired and not because mom and dad force them to, they eat when they are hungry, they are satisfied with what they have, without envying those who have more. Our life is punctuated by schedules, things that we force ourselves to do continuously, mechanically causing enormous stress on a daily basis. They play constantly and are satisfied with very little (a video, a song, a game, a ball, an ice cream).

They are incredibly generous, they have little, but they share without necessarily wanting to have more than the other, and they deprive themselves in particular to give me to me, to want me to be well, give me ice cream when they come back from the village, cucumber decoration on my dishes. 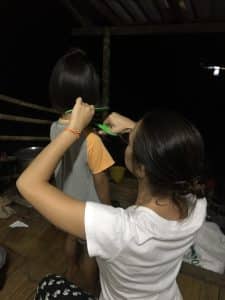 They are also very autonomous, from a very young age, for another anecdote, I was doing my laundry in my basin, I saw this little 5 year old NUNUPO, washing herself like a big girl, my European maternal instinct took over, I wanted to do it in her place, Washing her hair, body, brushing her teeth, she quickly took over “teacher I do it”, she washed herself, dried herself like a big one with her bucket and her soap (well I washed her hair it was stronger than me….)

Teaching them these two hours of English is a real pleasure, I thank them because they don’t know it but thanks to them I found a real vocation! We play games, oral comprehension, grammar, review the basics, discover the world…my class has grown little by little so I have the little ones and the big ones. It’s quite lively, then we end up singing. 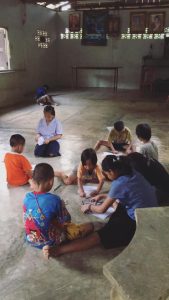 Every night I have the right to a football tournament, where I’m not very good, I have to admit, but despite all this it’s all in laughter and good humour. And I scored my first goal in 21 and a half years!

In short, a post is very short, you have to live it to believe it, I realize that I didn’t even talk about the living conditions, but after all we adapt to everything, I haven’t seen myself for 7 days in a mirror except in the scooter’s rear-view mirror to go get ice cream for the kids in town, and sincerely, I don’t give a damn!